Background. Interacting species sometimes impose reciprocal natural selection on each other. This process of reciprocal evolutionary change driven by natural selection is called coevolution. It shapes interactions between pairs of species, small groups of species, and large webs of species. It also affects how species radiate into groups of descendent species. As the number of potentially coevolving species increases, so does the number of ways in which coevolution can shape an interaction.

See the books listed on the Home page for detailed summarizes of geographic mosaic theory, coevolutionary biology in general, and, even more generally, the relentlessness of evolutionary change.

3. interactions among species differ among environments in their ecological outcomes

Trait remixing: The overall genetic structure of coevolving species continually changes through new mutations, genomic alterations, gene flow among populations, differential random genetic drift among populations, and extinction of local populations that differ in the combinations of coevolving traits they harbor. New genetic material on which natural selection can act can result from simple genetic mutations, chromosomal rearrangements, hybridization between populations, or whole genome duplications (polypoloidy). These processes contribute to the shifting geographic mosaic of coevolution by continually altering the spatial distributions of potentially coevolving genes and traits.

NOTE: Some descriptions of geographic mosaic theory collapse this “trait remixing” part of geographic mosaic theory to gene flow. That is an incorrect characterization. The point of trait remixing is that through a combination of genetic, genomic, and ecological processes, the available distribution of coevolving traits on which natural selection can act continues to change over time within and among populations. 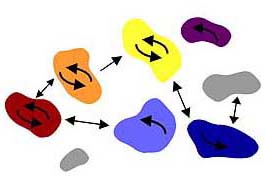 In studies of coevolution, a GxGxE interaction can be viewed either in the most formal way at the gene or genotype level (i.e., how selection acts on the same gene or genotype in across contrasting environments), or it can be viewed more generally at the level of how natural selection acts on two or more interacting species across many contrasting environments.

Implications of this view of coevolution: Geographic mosaic theory implies that coevolution is a genetic and ecological process that relentlessly reshapes interactions among species. The structure of selection, the intensity of reciprocal selection, and the distribution of genetically based traits available to natural selection continually change over time.  Understanding how these components of the coevolutionary process interact is becoming increasingly important as climate change, fragmentation of environments, and spread of invasive species are changing ecosystems worldwide.

How we study coevolution:  Examples of our field studies are described under Research Details. Briefly, we use a combination of mathematical models, laboratory studies, and field studies of natural populations to study how species coevolve in contrasting ecosystems over large geographic scales.

Over the years, we have used interactions as different as those between plants and their herbivores, pollinators, and frugivores, mycorrhizal fungi and conifers, and bacteria and viruses to explore how coevolution proceeds in different forms of interaction and under different environmental conditions.