How do geographic selection mosaics and gene flow shape the rate and trajectory of coevolving interactions? And how can hosts coevolve with multiple parasite species?

Effects of gene flow among populations on coevolving interactions. After some years of studying the evolutionary diversification of ecological interactions in the field, a group of us began a series of experiments on coevolution in laboratory microcosms. The initial studies used Drosophila flies to study the coevolution of competitive ability (see papers led by Amitabh Joshi). Much later we undertook a series of laboratory microcosms experiments using E. coli and T3 phage to explore the dynamics of rapid coevolution. The experiments were designed to test specific predictions of the geographic mosaic theory of coevolution. The work involved experimentally induced coevolution over time scales of hundreds of generations. The bacteria and phage were grown under different nutrient conditions, creating the possibility of a geographic selection mosaic in how natural selection acted on the bacteria and phage. A subset of these contrasting habitats (i.e., vials) was connected by gene flow, allowing an evaluation of how coevolution proceeds as a geographic mosaic rather than only in isolated local communities.  The studies began as a collaboration between our laboratory and Brendan Bohannan’s lab (then at Stanford University and later at Oregon State University), with Samantha Forde as the postdoctoral associate who spearheaded this work (See papers by Forde et al). Robert Holt from University of Florida and Ivana Gudelj and Robert Beardmore, both from Imperial College, London were closely involved in the modelling aspects of these studies. 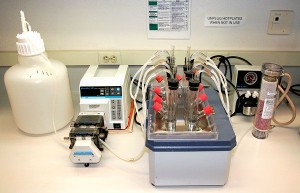 Subsequently, our lab became involved in a collaboration on microbial coevolution with Angus Buckling’s laboratory, formerly of Oxford University and now at the University of Exeter. Britt Koskella began, and led, the work when she was a postdoctoral associate working in our laboratories. These studies used Pseudomonas bacteria and bacteriophage to evaluate geographic selection mosaics in the field and in the lab. One of the goals of these studies was to understand the spatial scale at which local coadaptation, coevolutionary hotspots, and coevolutionary coldspots occur in these interactions in the field as compare with results in the lab. Some of the work has also been devoted to understanding how bacteria evolve resistance when they must coevolve simultaneously with multiple phage types. Britt is now a faculty member at University of California, Berkeley See, for example, Koskella et al. (2011) Proceedings of the Royal Society B, Koskella et al. (2012) Proceedings of the Royal Society of London B, and Thompson (2012) Microbe.

In a related set of experiments Derek Lin studied how bacteria coevolved with multiple viruses rather than a single type of viruses. The goal of this work was to evaluate how the early stages of multispecies coevolution differs from coevolution between pairs of species. (See Lin et al. in Publications).

The evolutionary and ecological implications of these experiments on experimental coevolution, and also experiments conducted by other labs, are discussed in Relentless Evolution (Thompson 2013). 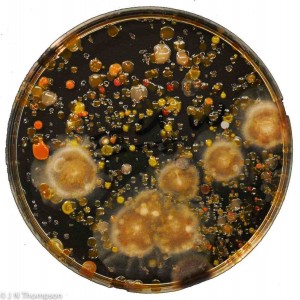