How has genomic duplication affected adaptation and diversification in coevolving interactions?

Much of coevolution may proceed through genetic changes in traits governed by single genes or groups of genes. We now know, however, that broader genomic changes also affect interactions among species. Hybridization, for example, produces populations with novel sets of traits that can increase or decrease the likelihood that an interaction occurs, and it can alter the ecological outcome of an interaction. Among the most detailed and extensive studies of those led by Thomas Whitham and his colleagues in their studies of hybrid zones in poplar trees and their interactions with other species. Other chromosomal processes such as whole or partial genome duplication have the potential to similarly great ecological effects, because they can alter gene expression of ecologically important traits.

In our lab, we have studied how whole genome duplication (polyploidy) affects interactions between plants with other species. Some plant and animal lineages have species that are diploid (two chromosome sets) and others that are tetraploid (four sets), octoploid, or even higher numbers of chromosome sets. Much of modern agriculture is built on species that are polyploid. In natural communities, many named plant species are groups of populations that differ in ploidy. Some of these populations have achieved polyploidy through hybridization with another species: one full set chromosomes from each parent species (allotetraploidy). Other species are polyploid through doubling of whole chromosome sets within a plant species (autotetraploidy).

Polyploidy and herbivory. Until the 1990s, no one had studied whether whole genome duplication in plants may affect the ecology and evolution of interactions with other species in nature.  We used naturally occurring diploid and autotetraploid plants in the genus Heuchera (Saxifragaceae) to conduce the first extensive studies. We determined the ploidy of individuals in populations of Heuchera grossulariifolia throughout its entire geographic range in the northwestern U.S., and we assessed whether polyploidy has arisen once of more than once. If it arose more than once, we could then begin to evaluate whether any differences we found between diploid and tetraploid plants in their interactions with other species were due to polyploidy in general rather than any idiosyncratic changes that occurred during the origin of any single tetraploid event.We also found, using molecular analyses, that tetraploidy had arisen more than once in this plant species (see papers by Segraves et al. under Publications).

We determined how these diploid and tetraploid populations interacted with other species. We first found that Greya politella moths preferentially attack tetraploid plants rather than diploid plants (see papers by Thompson et al. in Publications). Preference of the moths for tetraploid held regardless of the origin of tetraploidy. Later we found that two other insect species, Greya piperella and a geometrid moths Eupithecia misturata, preferred diploid in one population that we studied intensively (see papers by Nuismer et al.).

Polyploidy and pollination. In another set of studies using H. grossulariifolia populations,  we found that the species of floral visitors that pollinated tetraploid plants differed from the species that pollinated diploid plants. These differences held for two geographic regions in which tetraploid populations has arisen from diploid parents independently from each other (See Thompson and Merg in Publications).

These studies suggest that the evolution of polyploidy in plants can completely rearrange how plants interact with herbivores and pollinators. In some species, diploid and tetraploid plants can some look almost identical, and so the effects of polyploidy would go unnoticed unless the plants were analyzed for their genomic structure.  Because few ecological and evolutionary studies on species interactions evaluate the effects of ploidy levels on the interaction, we are probably underestimating greatly the importance of polyploidy for ecological speciation of plants, ecological interactions between plants and their enemies and mutualists, and coevolution between plants and other species. 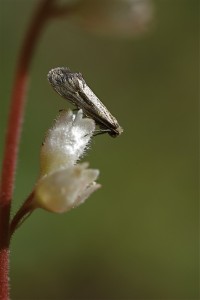